In this article we will be taking a look at the best warzone loadouts to take your game to the next level!

Read on to discover:

Looking for the finest FFAR Warzone Loadout? The FFAR is classified as an assault rifle, but with the appropriate set of attachments, you may make it more resemble an SMG.

The Suppressor has taken the place of the customary Agency Suppressor. The aim-down sight speed of the weapon was severely nerfed, so we needed this barrel to repair it. The Agency Suppressor’s bullet velocity and effective damage range are lost when using the Suppressor, but it still offers highly valuable sound suppression.

The Raider Stock is a go to choice for many professional warzone gamers such Huskerrs. This is because it greatly speeds up your movement and can help improve the FFAR’s overall mobility. The Bruiser Grip is the final attachment we would choose, giving the FFAR increased hip fire accuracy and faster movement speed.

The large magazines now come with a sizable reduction in the aim down sight speed, which is arguably the biggest nerf to the FFAR. The STANAG 50 Rnd is the only extended magazine we can suggest if you require one because the Salvo 50 Rnd Fast Mag’s ADS penalty is just too high.

When used in conjunction with a sniper rifle, the FFAR 1 stands out because it enables you to engage enemies up close and at a distance. The finest Kar98k loadout is a no-brainer because it still reigns supreme due to its mobility and damage output.

The Warzone Pacific DMR 14 is a powerful tactical rifle that can fire rounds as quickly as you can squeeze the trigger. In the right hands, it is still wholly usable even though it isn’t as dominating and oppressive as it was in the dreadful DMR meta.

The Task Force Barrel and Agency Suppressor increase the DMR 14’s effective damage range and bullet velocity, making it simpler to kill distant targets because you won’t need to lead your rounds as heavily. In essence, it turns this weapon into a perfect laser beam.

The Salvo 40 Rnd Fast Mag will ensure you have many rounds to fire off swiftly since if you’re tapping the trigger, you’ll burn up the DMR 14’s ammo supply quickly. Additionally, it will speed up your reloading, which is crucial if you’re engaged in a fierce gunfight.

Your ADS time is sped up with the aid of the Airborne Elastic Wrap. This is massive assistance because it’s very harsh with the Agency Suppressor and Task Force barrel.

I chose the Royal & Kross 4x optic because it zooms in just far enough to let you hit objects at a medium to long range without going overboard. Change this out for something smaller if you want something that will perform better at short to mid-range.

The Field Agent Foregrip will effectively lessen the kick from the DMR 14’s significant recoil if you don’t think the Airborne Elastic Wrap is essential for speed and ADS.

An SMG is advised since it will be instrumental when engaging targets up close. A Mac 10 or MP5 is a great choice.

Choose from Cold Blooded, Double Time, or EOD here, as is the case with most Warzone loadouts. EOD can save you from imminent death when you are unexpectedly targeted by enemy explosives, which happens frequently.

Two excellent choices for your second Perk slot are Overkill and Ghost. As I briefly mentioned above, overkill allows you to equip a primary weapon in your secondary slot. Since the DMR 14 isn’t the best weapon to wipe out structures or shred vehicles, I’d say it’s worthwhile in this circumstance.

But if you’d prefer to grab your backup weapon from a loadout drop or ground loot, Ghost will help you avoid detection whenever a UAV flies overhead. A fantastic quality to have when the circle gets small in the later rounds of a match.

Your most incredible option for an all-purpose deadly is Semtex. However, if moving vehicles frustrates you, consider using proximity mines or thermite grenades.

How to get the Warzone DMR 14 unlocked

Although it can take a little while if you recently purchased the game, you can obtain the DMR 14 very quickly. However, the gun will be permanently unlocked after you reach level 49.

After being an unreleased weapon during the cycle of Modern Warfare, the Sykov Pistol caused a stir when it was added to Call of Duty: Warzone and Modern Warfare back in Season 2.

The greatest Warzone Sykov loadout is still a highly potent secondary for players who do not want to employ Overkill in Season 6, even though the Sykov received a nerf that prevented it from being an overwhelming weapon.

Any Ghost class can benefit from the greatest Warzone Sykov loadout, which can even outgun an FFAR 1 at close range.

The Monolithic Suppressor will first give you more range, allowing you to destroy the enemy without having to be face-to-face. And if you’re in a bind, the 5mW Laser will provide you with significantly greater hip-fire accuracy.

You should only run one Sykov because the Akimbo perk for the Sykov has been nerfed. The VLK Elita Rear Grip should be added to the weapon to increase recoil control, while the Sorokin 140mm Auto barrel is still ideal for melting off player armor.

The 20 Round Mags will be best because the 80 Round Drum mags would significantly reduce your mobility after the 1.35 update’s nerfs.

When employing the greatest Warzone Sykov loadout, you will spend a lot of time in the faces of your opponents, putting you in the perfect position to be killed by explosives. Running E.O.D will significantly lessen the damage caused by explosives, allowing you to run through a hail of bombs and still get the kill.

You don’t require Overkill to combine the Sykov Pistol with a primary weapon because it is a secondary weapon. In Warzone, Ghost will keep you hidden from Heartbeat Sensors and the minimap.

You’ll need to run a weapon for medium-long range because you’ll only use this sidearm for close combat. You can quickly switch between your guns thanks to amplified, bringing the best gun to bear in each circumstance.

How to unlock a Sykov

In Modern Warfare and Warzone, you must score 4 kills while employing pistols in 5 different matches to earn the Sykov Pistol.

Players of Call of Duty Warzone have many options when putting together the greatest Warzone loadouts possible. There are outliers and moments when you just need a change, even if the Warzone meta dictates what weapons we should employ and provides us with a good selection of the top Warzone weaponry. In light of this, take a look at this AUG Warzone loadout.

It all boils down to a straightforward idea regarding the 45 Rnd Drum: you don’t want to run out of ammunition in the middle of a gunfight. The AUG sometimes feels like it takes an eternity to reload in the middle of a battle, but this bigger magazine should make that problem irrelevant.

AUG Secondaries in the Warzone loadout

As usual, the meta is pretty explicit about what players should employ in terms of Warzone perks and gear.

With this AUG build, you should employ Double Time, Overkill, and Combat Scout. Amped can be substituted with Combat Scout, although the former will ensure that you can see any targets you hit with one burst, allowing you to finish them off with a second.

Stun grenades are the finest option for the tactical slot, while Semtex or throwing knives are the best choices for the lethal slot. A heartbeat sensor isn’t necessarily a bad idea either, of course. However, the value of stun grenades cannot be emphasized if you intend to play aggressively. 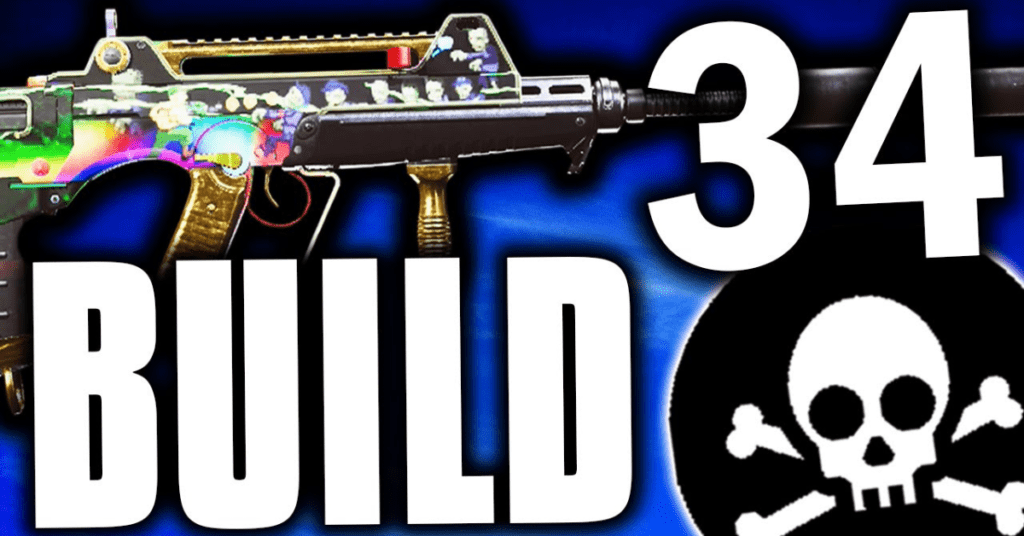